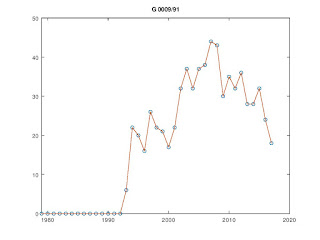 The most-cited decision of a Board of Appeal ever, G 9/91, is concerned with the question of whether Opposition Divisions and Appeal Boards have power to examine parts of the patent (i.e., claims), which were not attacked in the initial Notice of Opposition.

G 9/91 was decided by the Enlarged Board in consolidated proceedings with G 10/01. The latter decision looked at a related problem, namely at the question whether Opposition Divisions and Appeal Boards have power to examine Grounds of Opposition (Art. 100(a)-100(c) EPC), which where not raised by opponents within the 9 months opposition period (a brief summary of G 10/91 can be found here).

Hence, the question whether an Opposition Division or an Appeal Board had the power to examine originally unopposed claims arose. This question was considered an important point of law within the meaning of Article 112(1)(a) EPC by the Technical Board. It thus referred the following questions to the Enlarged Board of Appeal (G 9/91):


1. Is the power of an Opposition Division or, by reason of Rule 66(1) EPC[1973], of a Board of Appeal to examine and decide on the maintenance of a European patent under Articles 101 and 102 EPC[1973] dependent upon the extent to which the patent is opposed in the notice of opposition pursuant to Rule 55(c) EPC[1973]?

2. If the answer to the first question should be affirmative, are there any exceptions to such dependence?

When approaching these questions, the Enlarged Board found it important to note that the opposition procedure under the EPC is a post-grant procedure.They stated:


"It is inherent in any post-grant opposition procedure that the patent office cannot take any action in respect of a granted patent, however clear it may have become after grant that the patent is invalid, unless initiated by an admissible opposition. If no opposition is filed, the patent can only be attacked in revocation proceedings before a national court. In other words: the competence of the patent office to deal with the patent depends on the action taken by the opponent." (point 3 of the reasons)

The Enlarged Board also took into account that it was a requirement for filing admissible oppositions, that the Notice of Opposition contains, i.a., a statement of the extent to which the European patent is opposed (R. 55(c) EPC1973, now R. 76(2)(c)). The Enlarged Board considered that Rule 55(c) only made sense if it was


"... interpreted as having the double function of governing (together with other provisions) the admissibility of the opposition and of establishing at the same time the legal and factual framework, within which the substantive examination of the opposition in principle shall be conducted." (point 6 of the reasons)


The Enlarged Board also considered the previous case law on the issue. They generally agreed with what was said in T 9/87. The requirements of R. 55(c) EPC1973 to specify the extent to which the patent is opposed within the opposition time limit would be pointless if later on other parts of the patent than those so opposed could freely be drawn into the proceedings (point 10 of the reasons). This would also be contrary to the basic concept of post-grant opposition under the EPC (ibid.).


The power of an Opposition Division or a Board of Appeal to examine and decide on the maintenance of a European patent under Articles 101 and 102 EPC depends upon the extent to which the patent is opposed in the notice of opposition pursuant to Rule 55(c) EPC. However, subject-matters of claims depending on an independent claim, which falls in opposition or appeal proceedings, may be examined as to their patentability even if they have not been explicitly opposed, provided their validity is prima facie in doubt on the basis of already available information.

The full text of the decision can be accessed here.